I just knew it couldn't me. Not only did I get married for the first time after turning 50, I started a brand new venture two years later. I've felt for a while now that the only way to make real change is to do it for yourself. Turns out loads of boomers agree with my mindset. Hanah Cho, reporting for The Baltimore Sun reports that we may be at the beginning of a startup business boom time fueled by you know who.

For years after the dot-com boom, the 20-something upstart has been held up as a model of entrepreneurial spirit - take Google and Facebook, for instance. But contrary to such popular belief, it is the baby boomer generation - those 55- to 64-year-olds - that has the highest rate of entrepreneurship activity, according to a recent study by the Ewing Marion Kauffman Foundation, a Kansas City, Mo., nonprofit group that encourages entrepreneurship.

In fact, the study predicts the United States may be on the verge of an entrepreneurial boom because of a growing aging population. For the past decade, the 55-64 age group has been the most entrepreneurial. The youngest age bracket - 20 to 34 years old - has been the least active in creating new ventures, according to the study.

"I really can't wait for things to get better," says Felton Barner, who started ReIMAGE gallery in Savage Mill in retirement. "I need to do it on my timetable. I'll take the risk. At least I know I tried it."(Baltimore Sun photo by Karl Merton Ferron / July 22, 2009)

"How do you [fill out an application at] Denny’s and put down Princeton and the Sorbonne as your education?"

These are the words of the young man that most of us remember as the grandson who started the fire that killed his grandmother, Betty Shabazz. He is referring to his mother, Qubilah in an interview by Aliya S. King for NewsOne and GIANT magazine.

Personally, I still find it difficult to even think about this young black man and the events that led up to the most horrendous of deaths - dying because you are trying to save the life of one you love.

View the video below or visit NewsOne on BlackPlanet for the complete interview.
Malcolm X’s Grandson Breaks Silence!
By News One May 18, 2009 10:00 pm

This is totally unbelievable - yesterday while subbing on the Laura Ingraham Show, Tammy Bruce trivialized Michelle's talk with female students in the DC area. She says she doesn't understand the term "you talk like a white person".

Tammy Bruce showed herself to be the ignoramus I always thought she was, but I usually just ignored her chronic lameness. This is so outrageous - and then as if to cover this insult to be 'politically correct', she says something about 'trash' being color blind.

Listen to the clip on the Huffington Post:http://www.huffingtonpost.com/2009/03/23/tammy-bruce-calls-the-oba_...

Yes, Tammy Bruce is a nobody and we will see a lot more of these types as they try to get a little conservative spotlight. From her website:
"Tammy Bruce is an openly gay, pro-choice, gun owning, pro-death penalty, voted-for-President Bush authentic feminist. "

I don't believe it - but while I was updating my websites this morning (January 31st, 9:25 am est) the unthinkable happened - all Google searches came back with the same message "This site may harm your computer"!

My husband and I quickly began to search all of our sites to see if it was a virus attack or just an attack on our company and found out that it was the entire web. Check out this digg.com link for more info: 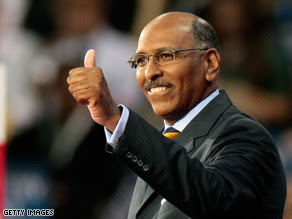 Mike Duncan read the writing and stepped down when he had 52 votes and Steele had 60. After a fourth vote, Ken Blackwell gave his big 16 votes to Steele. Another vote . . . Steele still didn't have enough (72) to win. Then Saul Anuzis finally concedes his big 20 votes (without supporting anyone) and Steele finally gets enough to win. Can you say "Resistance to vote for . . ."? Katon Dawson ran awfully close, however as cited on CNN "a number of party members said they didn't savor the thought of having a white Southerner as the face of the party in the age of Obama. In September, he resigned from a country club with a whites-only restriction in its deed."

Steele came out strong in his acceptance speech using words like 'empower' and 'change', with tough images:

"Those of you who wish to obstruct- get ready to be knocked over" and "We'll going to do what we do best - win."

So what's next? Steele is proud to say he was Obama's stand-in when assisting McCain in debate prep. Will we hear any lyrics about Steele the magic negro? Or will Rush Limbaugh hope he will also fail? We will see how this plays out as the RNC goes negro for negro with the DNC. First one to shine shoes loses.
Posted by dweiums at 4:39 PM No comments: As reported on The Hill website, Steele launches bid to run RNC By Susan Crabtree, Steele had decided to enter the race earlier last week and "had privately told close associates about his intentions. He spent the last four days making phone calls to RNC members to make a personal appeal for their vote."

“I want the gig,” he said. “I’m ready to lead this party. I think we have been kind of wandering and doubting ourselves for far too long. I think this past election was the culmination of that self-doubt, which has to end.”

Hmmm . . . perhaps Mike Tyson's ex-brother-in-law is feeling the strength of the Obama chi in spite of his right leanings.

I wish him luck, although he couldn't curl his lips around that phrase for Obama. He was too busy saying that Palin was an appropriate candidate, all the while knowing that he (Steele) was much more qualified.

Read the rest here.
Posted by dweiums at 5:25 PM 2 comments:

Welcome to the AfroSpear